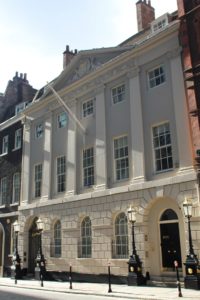 Skinners' Hall is temporarily closed for operational use and venue hire.

The Skinners' Company is overseeing an exciting major redevelopment of its unique building and outside spaces. In close consultation with Historic England and the City of London, the project aims to protect and conserve The Company's scheduled ancient monument for future generations.

Full operations are planned to resume in the Spring of 2024.

Hall hire enquires beyond mid 2024 may be directed to the e-mail address: hallhire@skinners.org.uk

Click on the Link below for a fascinating virtual tour of Skinners' Hall before the works commenced: 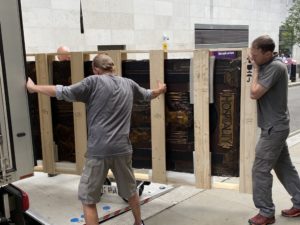 Protecting, conserving and enhancing our Hall

A History of Skinners' Hall 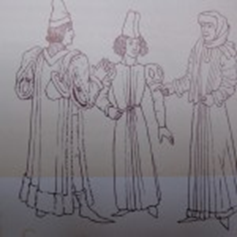 The first Skinners met each other in local taverns or churches to discuss their trade and problems, but as they became wealthier they began to pay for more permanent rooms. 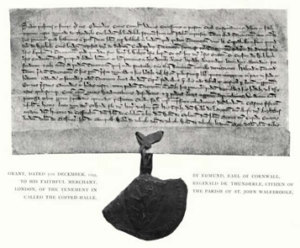 Records show that Skinners' leased the building that was originally on the site now occupied by Skinners' Hall. The building was known as the Copped Hall and was at that time the London home of Edmund Earl of Cornwall. This property faced Dowgate Hill and was divided into five shops with rooms above. Behind the shops was the main hall reached via a courtyard that gave ample space for preparing processions and pageants. Harbin's "Dictionary of London" states that the Skinners' were in possession of the Copped Hall in the time of Henry 111 (1216-1272). Harbin refers to a deed dated 1267, however this deed is not in the Company's ownership. The earliest reliable deed is dated 1295 and is shown here. 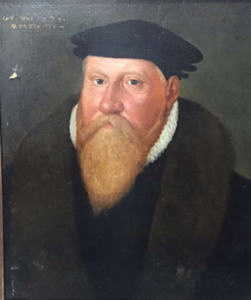 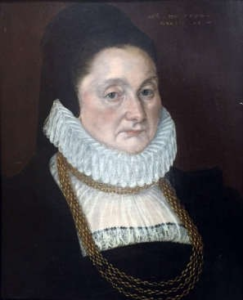 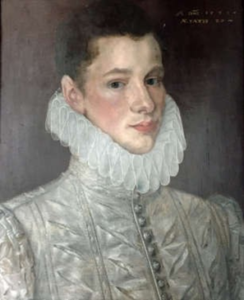 Dutch artist Cornelis Ketel produces a series of 14 paintings of the Smythe Family, 9 of which hang in the Committee Room at Skinners Hall. They are the earliest known portraits of a non-nobility family and include three of the Skinners most important benefactors. (Thomas Customer Smythe, Alice Smythe Nee Judd, Thomas Smythe). 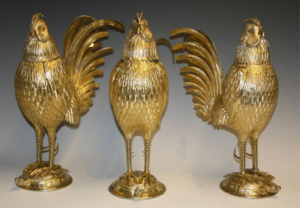 Skinner Sir William Cockayne dies and bequeaths £120 for the manufacture of five loving cups in the form of Cockerels, all five are still used today in the Cocks and Caps Ceremony as part of the Annual Election Dinner. 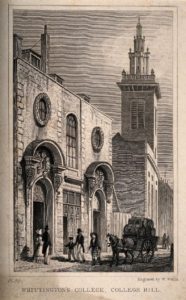 Land to the rear of the hall formerly the site of Whittington College located on College Hill was purchased, this is now the location of the Old Court Room and Court Room. 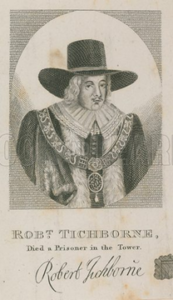 Sir Robert Tichborne, Master of the Skinners hosts a reception for General Monk who was one of Cromwell's most trusted Generals, but on the restoration of the Monarchy Monk appeared on the winning side. 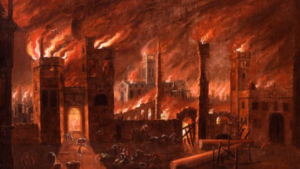 The great fire of London saw the building destroyed to ground level, with parts of the basement remaining intact, rebuilding was started immediately after with the new hall being completed by 1672. 52 livery Halls were destroyed by the fire. Building now Grade 1 listed with the basement listed as a scheduled ancient Monument. 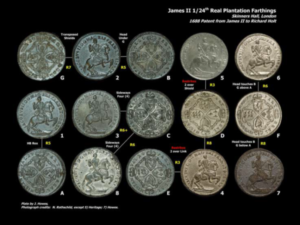 The Hall was let to the Commissioners of Farthings for use as an 'adjunct' to the Tower Mint. The production of coinage at Skinners' came, over time, to be centred upon the creation of  'Real Plantation' farthings, the first authorized coins specifically for the English North American colonies, and they were the only coinage struck under the authority of the English Crown using a Spanish denomination. 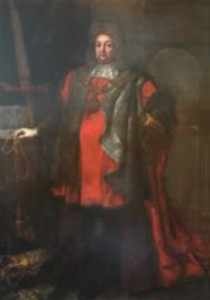 Sir Thomas Pilkington twice Master of the Company and three times Lord Mayor hosted William III and Queen Mary at Guildhall, not bad for a man who had earlier spent four years incarcerated in the Tower. 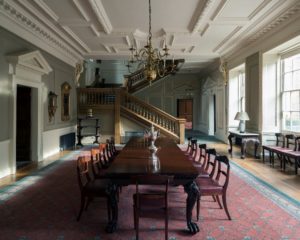 The East India Company donate the dining table in the Old Court Room to commemorate their use of the Hall between 1698 -1709. 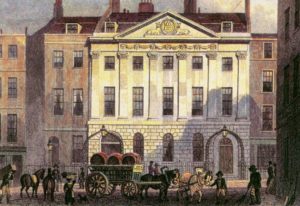 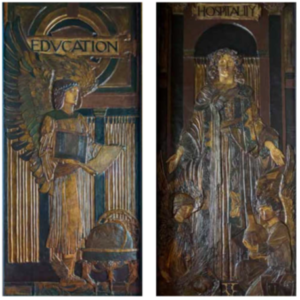 The Skinners' Company commissions Robert Anning Bell to produce a series of four Gesso panels that were originally hung in the main hall before the installation of the final Brangwyn Murals. They now hang in the Charity Corridor (Education, Hospitality, Education) the fourth Commerce was destroyed whilst attempting to remove it before it was damaged in the Blitz. 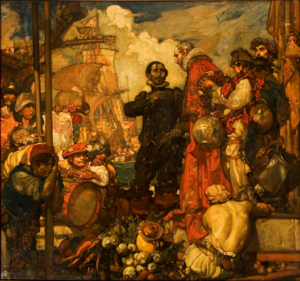 The Skinners' Company commissions a series of murals from the celebrated artist Frank Brangwyn. He was chosen because Thomas Lane Devitt, a past Master, had already sponsored him to paint a mural for the Royal Exchange. He had originally been asked to depict the "stir and colour of the long-drawn pageant of the guild". Thus each of the original ten panels along the side walls show important occasions in the Company's history. 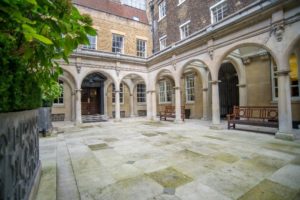 The scheme for transforming the Courtyard was presented. The works were some time in the delivery; eventually being concluded as conflict broke out in 1914. This project saw the closing of the rear areas in the Great Courtyard and the removal of the iron railings thereto, the laying of new flagstones, the re-fenestration of the ground floor windows and the creation of an entirely new entrance, in the style of a cloistered walk. 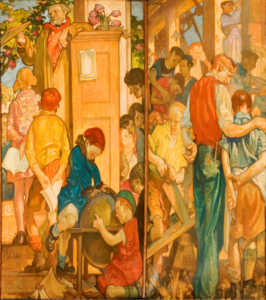 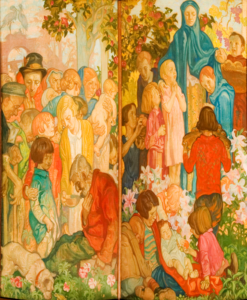 The Skinners' Company commissions Frank Brangwyn to produce 4 additional panels for the corner of the hall not completed until 1937. The 4 panels form two separate murals are entitled 'Education' and Charity'. 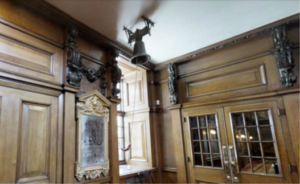 The Skinners' Company is presented with the Bell which is now hung in the Outer Hall, cast in 1190 it  is one of the oldest in the country, cast by monks and found in the ruins of an old monastery in Wales it was taken to the Whitechapel Bell Foundry and then donated to the Company by Douglas (Ding Dong) Hughes a Skinner who was at that time the Director of the Whitechapel bell foundry. 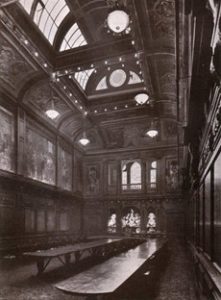 Following work to repair damage to timbers in the hall caused by death-watch beetle, additional damage was suffered from a fire in the roof of the Great Hall. 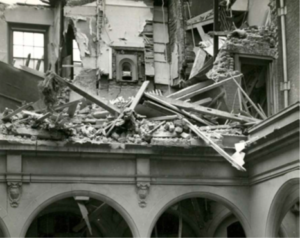 Bombing sees damage to the Oak Drawing Room, with the Clerk's Office being destroyed, and led to the death of Mr Wallis Bull a firewatcher at Skinners' Hall. 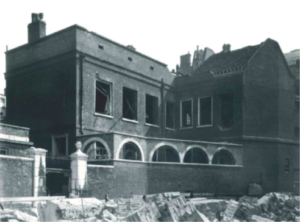 Bombing sees damage to the Court Room and Cedar Drawing Room. Butler George Stiles was also a Fire Warden and was known to have kicked firebombs from the roof and convinced the Fire Brigade to favour the Hall with the assistance of the Spirit Cupboard. 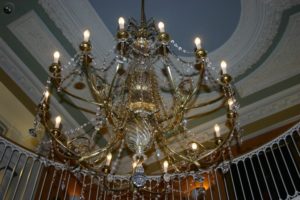 The Skinners' Company is donated the Malmesbury Chandelier. The chandelier was made in one of the glass factories sponsored by Potemkin the favourite / lover and first Minister to Catherine the Great of Russia, a gift from Catherine the Great to the Rt Hon Sir James Harris later to become the 1st Earl of Malmesbury whom was Envoy-Extraordinary to Russian Court. It was brought back to England in the 1780's and was donated to the company in 1950 by the 6th Earl of Malmesbury. Made of British Glass originally candle, then gas and then electric. 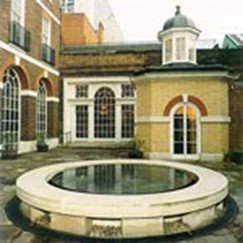 Major works - the old garden area of Skinners' is redeveloped to provide for Pellipar House and the Company equipped with new kitchen, roof top garden and service areas.