Home > Skinners' Hall > A Tour of the Hall 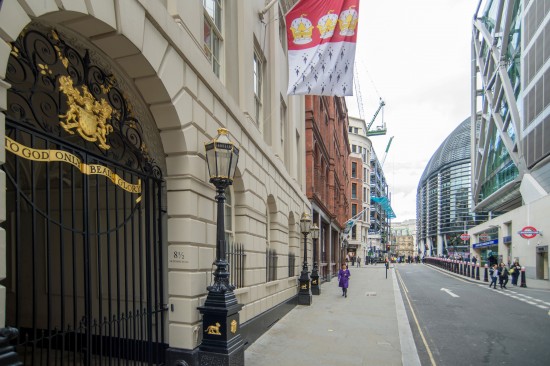 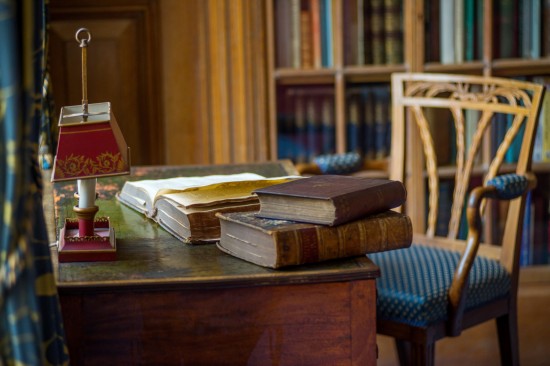 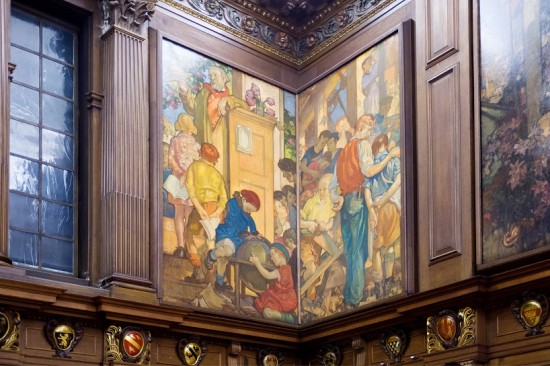 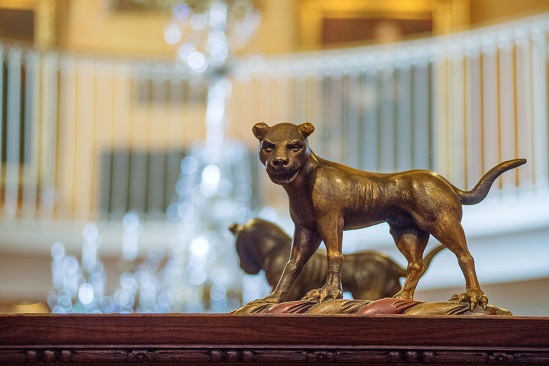 A Tour of the Hall

The Skinners’ Company’s Coat of Arms 1634

In non-heraldic language, the Shield has ermine tails, the Chief - upper third - has three ducal coronets capped with ermine and golden tassels on a red background, and the Crest is a lizard (lucern or lynx) - a short tailed wild cat whose fur was formerly held in great esteem. No one below the rank of Earl was allowed to wear it. The Supporters are a lizard on the left and a marten on the right side of the Shield. The Scroll or Mantling is blue lined with silver, and represents the cloth that hung over the helmet to prevent overheating in the sun.  The English motto was added in 1687. 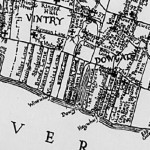 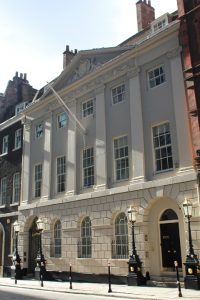 In the English Palladian style with five bays of painted stone, and a frieze of lions carved in Coade stone topping the pediments. The coat of arms embellishes the central tympanum.

Guests enter through gates at the unusually addressed 8½ Dowgate Hill.

An area originally used for the formation of guild processions, the east facing elevation of the Banqueting Hall dates back to 1670 with its fine red brick and blue headers laid chequer-wise in Flemish bond. The entrance to the Banqueting Hall is flanked by embellished pilasters with carved conies (rabbits) whose fur was used by the lower orders in medieval society. The stone cloister was added between 1902 and 1916 by W. Campbell-Jones. The building is entered to the right where the Company’s bespoke ermine and lynx embellished carpet begins. Guest cloakroom facilities are located here and guests are shown into the Outer Hall. 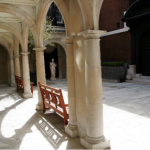 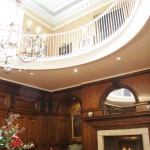 The plaster ceiling dates back to 1670.

The glass chandelier was presented by Catherine the Great to James Harris, first Earl of Malmesbury, a Skinner and Ambassador to the Court of St. Petersburg in the 1780s.

The Bell was cast in 1190 and is believed to be one of the oldest extant bells in England. It was presented to the Company in 1927 by Albert Hughes, a Skinner and owner of the Whitechapel Bell Foundry.

The four mirrors were originally installed in the Company’s barge, which was in service from 1739 to 1858, when barges ceased to be used for the Lord Mayor's procession.

The Outer Hall is available for the solemnisation of civil marriages. 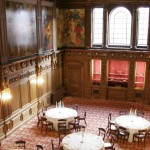 Paintings by Sir Frank Brangwyn embellish the Banqueting Hall. The earliest ones on the long walls date from 1902-1909, and depict ten episodes from the history of the Company.  Later paintings are dated 1920 and are in a lighter palette - they show the Skinners’ Company’s administration of Charities and Schools.

Sadly the gallery and stained glass windows located at the southern end of the Banqueting Hall were lost in the bomb damage of July 1944.

The Hall can be configured to suit various commercial uses. 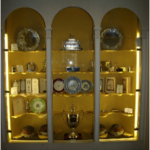 Built 1801 - 1803 and attributed to William Jupp the younger. The Charity Corridor houses painted gesso panels created by Anning Bell in 1903 - each panel depicts the work of the modern Skinners’ Company: Charity, Education, and Hospitality. Sadly a fourth panel, Commerce, is reputed to have been destroyed during its removal in advance of the World War II London Blitz. The Corridor underwent major refurbishment in 2010, including a new display case housing items that represent the work and interests of some of the Company’s livery company tenants. 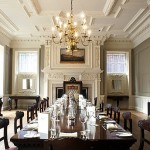 Located on the site of Dick Whittington’s College, the land was purchased in 1602.  The 1737  ‘egg and dart’ panelling and pediments are attributed to Dunce the elder. The room was the Company’s Court Room before bomb damage in 1944.  The Old Court Room was restored in 2012 under the direction of English Heritage - colour choices referenced the original architectural period of the interior. Today the Old Court Room is used for receptions, seminars, dinners, and dancing - thanks to a sprung dance floor originally installed for summer balls.

Dating from 1670 - rebuilt after The Great Fire of 1666 -  turned balusters on three flights of stairs are decorated with leaves, a deep string of acanthus carving, and large square newels. The bottom flight west wall, bomb damaged in July 1944, was not replaced, leaving the staircase open to the Old Court Room. The plasterwork is similar to work found at the Mansion House, and was installed in 1737 by Thomas Meekes, to a design by Dunce the elder.  Between 2013 and 2014 restoration work began on the stairwell. The plasterwork has been embellished with gold leaf  - to reflect the high status of the mouldings - and much of wood panelling detail has been uncovered. 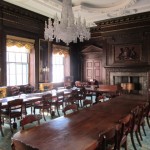 Before becoming the Court Room, where the Company governs its affairs, this room was known as the Cedar Drawing Room. The Virginian Cedar Wood panelling dates from 1670 – the wood is thought to originate from Bermuda and is reputed to have been transported as ships ballast.  The highly ornate barrelled ceiling circa 1876 was destroyed in the July 1944 bomb blast, and was replaced by a simple ceiling. The Court Room is a perfect setting for key business meetings and presentations.

Created between 1984-1986 by J. Sampson Lloyd, the flat roof is above the new kitchens.  The Roof Garden is accessed via a chamfered square brick pavilion with a glazed octagonal lantern roof, or via the large Venetian windows of the gallery. The planting of the roof garden, and the inner and rear courtyards, is governed by the Company’s drive for sustainable improvement. This private outside space is an oasis of calm and provides an ideal area for summer entertaining.