A wealth of experience and dedication to delivering good service

Aside from overseeing day to day maintenance of the Hall, the Skinners' Company's Hall Management Team led by Paul Richards, is committed to providing high levels of front of house service and working towards sustaining and improving income via commercial use of Skinners' Hall.

The team have extensive experience of hospitality and facilities management, gained within private, corporate and military institutions. All share the mantra of presenting a refuge free of problems.

www.skinnershall.comis the website devoted to the promotion of commercial hire and operated by our catering partner - Party Ingredients Limited.

Several livery companies rent fully serviced offices, and others choose to hold the majority of their events at the Hall in return for storage facilities.

Incorporated in 1709 during the reign of Queen Anne but very active as the Guild of Fan Makers from at least the reign of Charles II, today’s Fan Makers’ Company is the youngest of the ‘old’ City Livery Companies being the last to receive a Royal Charter for nearly 300 years and becoming the 76th Livery Company in order of precedence.

Successor to the Guild of Turners whose exact origins are unknown. Unlike the products of the potter, wooden objects are perishable, so the earliest date of turning is not known exactly. However, turned wooden bowls excavated from peat bogs at prehistoric levels show that the craft is certainly many thousands of years old.

The Worshipful Company of Fuellers http://www.fuellers.co.uk/

The Fuellers, 95th in order of precedence, represents the energy industry. Their origins can be traced back to the Woodmongers of the 14th Century, but membership now incorporates coal, oil, nuclear, gas, electricity and renewable energy industries. All aspects are represented - production, supply, distribution, marketing, research, finance, education and major consumers.

Founded in 1992, incorporated by Royal Charter, the Company represents one of the leading professions contributing to the success of the City of London.   It provides opportunities to engage with those shaping the future of the UK; management consultants working inside the City network rather than as outsiders looking in.

In addition to our tenants, Skinners’ Hall provides a regular base for the following livery companies to hold their events.

The Worshipful Company of Gold and Silver Wyre Drawers http://www.gswd.co.uk

Between 1698 and 1709 the Hall was leased to the East India Company. The East India Company was established in 1600 as a joint-stock association of English merchants trading to the 'Indies'.  A period of rivalry with a 'New' Company after 1698 resulted in the formation in 1709 of the United Company. This 'new' East India Company was transformed during the second half of the eighteenth century from a mainly commercial body with scattered Asian trading interests into a major territorial power in India with its headquarters at Calcutta. The political implications of this development eventually caused the British Government to institute a standing Board of Commissioners for the Affairs of India (or 'Board of Control') to exercise supervision over the Company's Indian policies. This change in the Company's status, along with other factors, led to the Acts of Parliament of 1813 and 1833, which opened the British trade with the East Indies to all shipping and resulted in the Company's complete withdrawal from its commercial functions. The Company continued to exercise responsibility, under the supervision of the Board, for the government of India until re-organisation under the Government of India Act 1858. 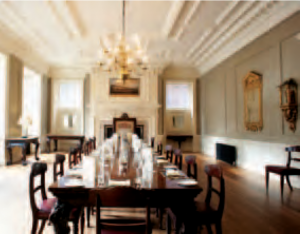 The East India Company left Skinners' Hall in 1709, and presented the Skinners’ Company with the mahogany East India table which is still in use in The Old Court Room.