39th (Skinners) Signal Regiment (Volunteers) provides a rapid deployment of reliable and robust communications, and support to the government, police or other blue light services at little notice.

Previously the Regiment has provided assistance to flood victims in Gloucester and Northumbria, and recently provided support to the organisers of the Olympic Games.

Originally adopted by the Skinners’ Company in 1954, the Regiment formally acknowledged this by changing its title and reforming into the 39th (Skinners) Signal Regiment (Volunteers) in April 1995.

The Honorary Colonel of the Regiment has always been a member of the Skinners' Company Court, and the Master and Wardens visit the Regiment annually and donate awards for the best male and female soldiers. The Regimental Headquarters are in Bristol with sub detachments across the south of England. 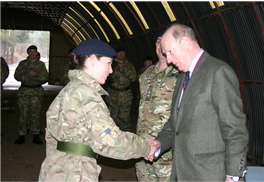