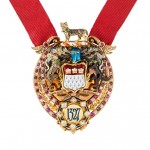 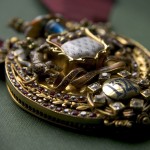 The Skinners’ Company’s Master’s badge is a jewel as much as a badge. It measures only 72mm long by 50mm wide, but it is filled with intriguing and beautifully wrought detail. Making it would have involved (appropriately enough) six or seven different skills: goldsmith, setter, modeller, enameller, diamond mounter, engraver and possibly a finisher.

Illustrated in vitreous enamelled gold, with green circlets round their necks, are three fur-bearing animals on the backs of which – or sometimes their underbellies – the Company’s fortune was founded. The beast at the top of the jewel has the same detailed attention to his spots even on the back of the badge, which is never seen when the item is worn. The enamel colour range includes white, black, light and dark brown, orange, pink, red, green, azure and royal blue.

The base is 18 carat yellow gold. It does not appear to be hallmarked, but this is not unusual for its period according to research at Goldsmiths’ Hall library. There is a galleried frame around the piece to allow in light below the 64 diamonds and 40 rubies. In the centre is the Company’s coat of arms with helmet above in a striking blue. Below the crest, on a pink enamelled ribbon, are the words, ‘To God only be all glory’. A roundel towards the base displays 1327, the year of our first charter.

The reverse is engraved with the names of the Master, Charles Barry, and the four wardens, Joseph Causton, Thomas Hobson, Richard Knight Causton and William K. J. Langridge, who commissioned the jewel in 1874. They command our gratitude, as the craftsmen who made it command our admiration and wonder. A jewel indeed.