The controlling governing body of the Skinners’ Company is its Court, made up of 31 senior members of the Company. A new Master and four Wardens are elected each year. Court meetings are chaired by the Master. The Court delegates much of the management of the Company to committees. Committee members are all Skinners and usually have experience in the area concerned.

Membership of the Company

Individuals cannot apply for membership of the Company

There are about 1,400 members of the Livery and Freedom

In the past to become a member you had to be the son of a Skinner - joining the Company by patrimony - or be apprenticed to the Company when you became attached to a master to learn his trade.  Today the membership structure is largely unchanged, but apprenticeship is now symbolic. Apprentices learn about the ethos, aims, and educational and charitable activities of The Skinners’ Company.

You can learn more about the work we do by reading our latest Annual Review here.

Members of the Freedom

Freeman was the term used for individuals who had successfully completed their apprenticeship. During the medieval period becoming a Freeman could take up to 10 years, or could be granted sooner if your Master felt you had learned the skills of your craft sufficiently well.  Once your apprenticeship finished you would claim freedom of the City of London at the Guildhall and be presented with your City Freedom scroll - a parchment proving you were made ‘Free of the City’ - and allowed to trade your goods independently in the City. Once a Freeman, your Livery Company’s Master and Wardens could allow you to take on an apprentice of your own. Now the Freedom is a social apprenticeship, taking 4 years to complete, after which the Master and Wardens can allow a Freeman or Free woman to take on an apprentice of their own.

Members of the Livery

Livery status was originally shown by distinctive badges, uniform or gowns worn by the members of a livery companies. Those men and women chosen for the Livery are formally elected at the feast of Corpus Christi each year. Livery members may attend three important annual dinners at Skinners’ Hall. Only Livery members can vote in the election of the Lord Mayor and Sheriffs.

More detailed information on Apprentices, Freedom and Livery can be found here. 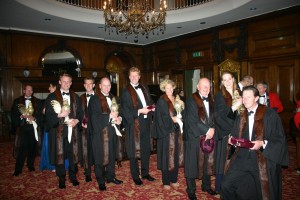 The  ‘Cocks and Caps’ Ceremony'

On Election Night, newly elected Livery men and women process in their Livery gowns and parade the Cockayne cups and five caps - velvet circlets adorned with Company emblems - around the central table in the Banqueting Hall, usually led by regimental bandsmen. It is a noisy and colourful affair, and once the procession has stopped, the outgoing Master is given a cap which he places askew on the head of the chief guest. When asked by the Master whether it fits the guest, all present shout 'No' or 'it does not fit’ in response. When placed snugly on the new Master’s head, all cheer. This part of the ceremony is thought to be one of the last surviving examples of a common ritual, and the origin of the phrase ‘if the cap fits wear it’. The Master and Master Elect then drink each other’s health from a cup and each new Warden is crowned with a cap and is toasted from a Cockayne cup in similar fashion.

William Cockayne's will of 1599 left £120 for the making of five cups in the form of cocks to be used in the annual election of the Master and Wardens on the feast of Corpus Christi. Over 450 years later the cups are still used - the heads are removed and the bodies filled with wine to drink the health of the new Master and Wardens. 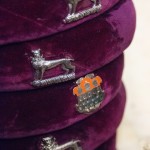 The Caps and Cups 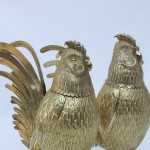