In Summer 2015, the Skinners' Benevolent Trust successfully launched its "Families in Poverty Initiative". Families are now able to apply to our scheme for assistance, who were previously excluded under our single persons criteria. Since its launch, we have assisted a number of families in crisis purchase a variety of items ranging from white goods through to baby cots and children's clothing.

Examples of families that we have recently assisted — names have been changed for confidentiality purposes. 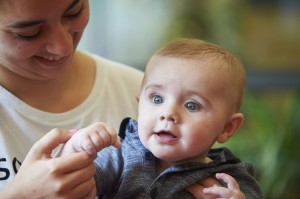 Katie, a young mum who had to flee her home due to domestic violence, had been placed in a new unfurnished flat. Due to severe financial hardship she was unable to afford to purchase dining furniture, and was having to eat meals on the floor with her children. She also had no curtains, and thus lacked any sort of privacy. Her support worker approached the Skinners’ Benevolent Trust for a grant, and she was awarded £254 for these much needed items.

On receiving the grant Katie said, “We now enjoy living in our new flat, which was unfurnished, especially during our financial hard times”

Susan, a young mum with severe and enduring mental health problems, and a 5 year old autistic son is unable to work, leading to considerable financial hardship and social isolation. Susan was in desperate need of a new cooker for the family which she was simply unable to afford on her own. Her support worker approached the Skinners’ Benevolent Trust  for a grant and was awarded £169.99 for a new cooker.

On receiving the grant Susan said, “I am excited about the new purchase. I no longer feel stressed about cooking healthy meals for my son”