In 1901 the Court of the Skinners’ Company decided to put aside some money for decorating the Banqueting Hall.  A past Master, Thomas Lane Devitt, recommended the artist Frank Brangwyn whom he had already sponsored to paint a mural for the Royal Exchange. 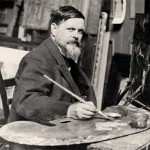 Brangwyn was very popular in his day and received honours from around the world, but his work was rather neglected after his death. There is a revival of interest in this superb draughtsman and the Company is lucky that members in the past had the foresight to commission such a magnificent series of murals. Brangwyn painted a series of panels typical of his murals – busy and decorative like hanging draperies. Eleven panels illustrate Skinners' history, the 'Harmony' panel was painted for the Minstrels' Gallery, and the ‘Charity’ and ‘Education’ panels were painted nearly 30 years later. A self-portrait of the artist as a schoolteacher appears in 'Education', and Donald Sinden, the actor and Brangwyn's neighbour when a boy, modelled as a pupil.

A short history of the commission (footnotes 1-12 below)

On 7 November 1901 the Skinners’ Court of Assistants decided to allocate the sum of £1000 for seven years "for the purpose of assisting the cost of the decoration of the upper walls of the Dining Hall, above the oak panelling". 1    A week later Thomas Lane Devitt, twice Master of the Skinners’ Company, wrote to the Clerk, Herbert Draper, enclosing letters from Charles Holme, Editor of The Studio magazine, and Alfred East RA, outlining the capabilities of the artist Frank Brangwyn. Devitt himself was familiar with Brangwyn’s work, having sponsored the artist to paint a mural, Modern Commerce, for the Royal Exchange series in 1899.

In April 1902 Brangwyn was duly commissioned to paint six large panels (measuring 289.6x320cm) and four small panels (289.6x152.4cm) which would represent the "stir and colour of the long-drawn Pageant of the Guild", and was to be paid £4000. 2    By July it had been decided to add a further panel in the Gallery (measuring 152.5x365cm) for which Brangwyn would be paid £300, and it was expected that the panels, all oil on canvas, would be completed within five years. 3    The artist was sent a list of what were considered appropriate subjects together with an outline drawing of the Hall on which he sketched his proposals. Various historical topics were considered and on 22 July 1902 the Estates’ Committee approved a list which differed only marginally from the final outcome. In August Brangwyn was "instructed to commence work upon two of the large pictures as soon as possible with a view to their being completed in twelve months from the present time". 4

The Skinners were to be disappointed. Brangwyn’s inability to refuse commissions or challenges, combined with his apparent lack of time management skills led to serious delays on many projects. The first panel to be completed, Departure of Sir James Lancaster for the East Indies, 1594, was exhibited at the Royal Academy in 1904, the same year that Brangwyn was elected as an Associate. 5   The second panel, River Procession, 1453 was delivered in March and Granting of the Charter by Edward III, 1327 arrived in November 1904.

In an attempt to appease the Skinners Brangwyn presented the Company with an oil painting for the Library in 1907 and a set of etchings in March 1908 when the seventh panel Defence of London Bridge, 1554, was installed. Reception of General Monk, 1660 followed in July 1908 and Sir Thomas Pilkington’s Banquet, 1689 in April 1909. Seven years after the start of the project Brangwyn still had two panels to complete, and the Skinners became somewhat concerned and irritated at the continual delays. The Master was assured by Brangwyn that another panel would be completed by 12 May and work would begin on completing the series after 16 May. The final panel Harmony was eventually delivered in August and Brangwyn proposed to add finishing touches to the murals the following month. 6    However, in April 1910, when Brangwyn suggested an Open Day for fellow artists and members of the Press, the Court of Assistants acceded on condition that "the panel in the Gallery be first completed." 7

In 1912 the artist wrote that he would "never forget the obligation I am under to the Skinners Company for having given me an opportunity that has seldom if ever fallen to the lot of a British Artist in this Country, and it has always been my desire to complete my work at Skinners Hall to the best of my ability". Despite being extremely busy he then proposed replacing Anning Bell’s gesso panels at the south end of the Hall for £300, sensibly adding that he could not "bind himself to any fixed time for its completion". 8    These four panels were subject to even greater delays than the first commission, and the Company wrote various letters to enquire about progress in 1918, 1920, and 1922 by which time the Skinners were "getting very anxious." 9    Brangwyn feigned illness and over-work in 1923, and in 1924 announced that his assistant, the American Dean Cornwell, was working on the panels. In 1930 Mr Burke, a Past Master, reported that he had visited Brangwyn’s studio and "had seen there four pictures which had been painted from Mr Brangwyn’s designs and under Mr Brangwyn’s supervision though not by Mr Brangwyn himself." 10    Brangwyn claimed that the panels were as laid in by an assistant and that he would finish them personally - it would take about a month. Seven years later the artist wrote that the panels, entitled Charity and Education, were completed and that he wanted "them away from here as they are in my way." He noted that the colours were not in harmony with the existing panels but felt that, given time, they would tone down. 11 Education includes a self portrait of the artist as a school-teacher, and Sir Donald Sinden was the model for the boys shown in the adjacent panel.

How does one judge the panels as a complete entity? Herbert Furst noted the "impression of richness, sumptuousness, due to the co-operation of architecture and painting" and described them as "hanging draperies", whilst Walter Shaw Sparrow felt the decorative panels revealed "such a breadth of vision, such a lyrical swing in design, such a superb virility in handling, as will ever be remarkable in the history of British art." 12

6.  Brangwyn’s original panel for the Gallery was Fruits of Industry, now part of the Elliott collection in the Mildura Arts Centre, Australia